Declining food stocks and rising prices in Transcarpathia and across Ukraine

The food and medicine shortages caused by the war and the wave of refugees have been confirmed by the Hungarian Interchurch Aid’s field staff in several regions. From Dnyipro, photos of empty shelves in shops were received, and from Lviv, local staff informed the relief organisation’s Budapest headquarters of long supermarket queues and dwindling stocks. Supply problems are also increasing in the Transcarpathian districts where food aid is much needed.

János Gerevich, head of the Hungarian Interchurch Aid’s Ukraine office said that in addition to their help points on the Ukrainian side of the border, they are helping both community hostels operating at full capacity and families hosting and feeding refugees in the districts of Berehove, Munkacsevo and Vinohragyiv, among others, with the necessary cooking ingredients. The food shortages in the shops also affect pensioners and sick people living alone, who are also supported. The local head of Hungarian Interchurch Aid said that, in addition to the border districts, they have received requests from the Ivano-Frankivszka region and the Chernivtsi area to help feed the community refugee shelters there. 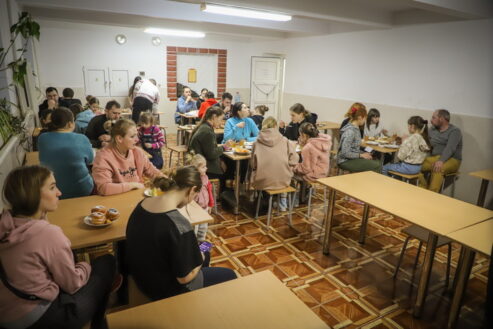 János Gerevich added: “In the Bethlen Gábor Hungarian High School in Berehove, 60 people are permanently housed in the dormitory. Some of them are changing, others are settling in for the longer term. Mothers, children, grandmothers, who come to the border with their husbands, but here they have to separate. The dormitory is also supported by the Hungarian Interchurch Aid with refrigerators and washing machines, while it also provides food for the residents. Tens of thousands of refugees have already arrived in the Transcarpathian region, with more than 1,200 refugees officially registered in the Berehove district alone.

The Hungarian Interchurch Aid is continuously helping with information points on both sides of the border, in the settlements of Asztej in Transcarpathia and Barabás in Hungary. It has also set up shelters in its institutions in Debrecen, Miskolc and Budapest, and delivered several truckloads of food and hygiene products to families fleeing the war in the border region. It has also opened a humanitarian office in Lviv, where it is actively assisting in the care of refugees while preparing a complex relief programme as a member of the ACT Alliance, an international coalition of relief organisations.