HIA has opened a humanitarian office in Lemberg

The staff of the Hungarian organization also agreed on the assistance with the deputy mayor of the strategically important Ukrainian metropolis and several regional representatives.

According to the city’s deputy mayor, there were no discussion about the support of the city with foreign professional aid organizations so far and no UN coordination was established. The Hungarian humanitarian professionals also conduct surveys as part of a complex international aid program.

Giuliano Stochino-Weiss, head of the Lemberg Humanitarian Center at Interchurch Aid, said he had visited the Lemberg Humanitarian Coordination Center where the aid is distributed. While at the former site they help with drinking water, he visited, among others, the Lviv Arena, where a playing zone was set up for refugee children and a hygiene point / changing room as well as a mobile charging station will be installed at the train station as planned. 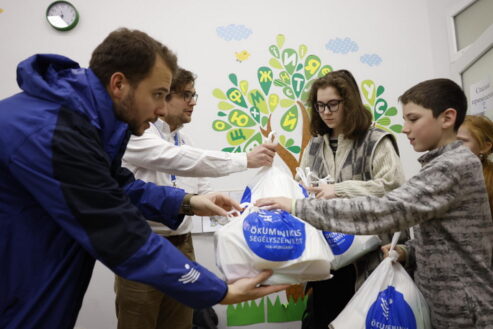 According to the experience of the Hungarian humanitarian expert, the movement in the city is huge, most of the refugees are in transit from the eastern part of the country, and are mostly heading towards the Polish border. The cohesion is huge, there are a lot of volunteers, many of whom have been recruited to the Hungarian team. Interchurch Aid has also opened a humanitarian office in the city center, which has been coordinating an international aid program with member organizations of ACT Alliance working in the region for decades.

In the meantime as it is well known Hungarian Interchurch Aid is constantly providing an information point that helps on both sides of the Hungarian-Ukrainian border, in the settlements of Asztély and Barabás. It has set up accommodation in its institutions in Debrecen, Miskolc and Budapest, as well as delivered donations of several trucks of food and hygiene items to the border to support refugee families running from the war in the border region.