Stories from the field

Our colleagues encounter countless shocking and tragic stories at the Ukrainian-Hungarian border and in our centres in Beregovo and Lemberg.

Mother Natalia and her children Igor, 9, and a baby girl Nastia, 2 months, come near Boryspil in Kyiv region. Natalia’s husband is in the army. “Our village was destroyed. It was bombing every day.” Natalia and her children arrived to Lviv by bus. “I fear. What about my family? I’m afraid for my husband.” Natalia says she wants peace for her children. She says she wants to stay in Lviv until the end of the war, because the bombings in her home village were incredibly stressful. “When at night there was bombing, I did not know where to go. We had a fear that our building will be destroyed. In this refugee shelter I feel peaceful.” (10.3.2022, Lviv) 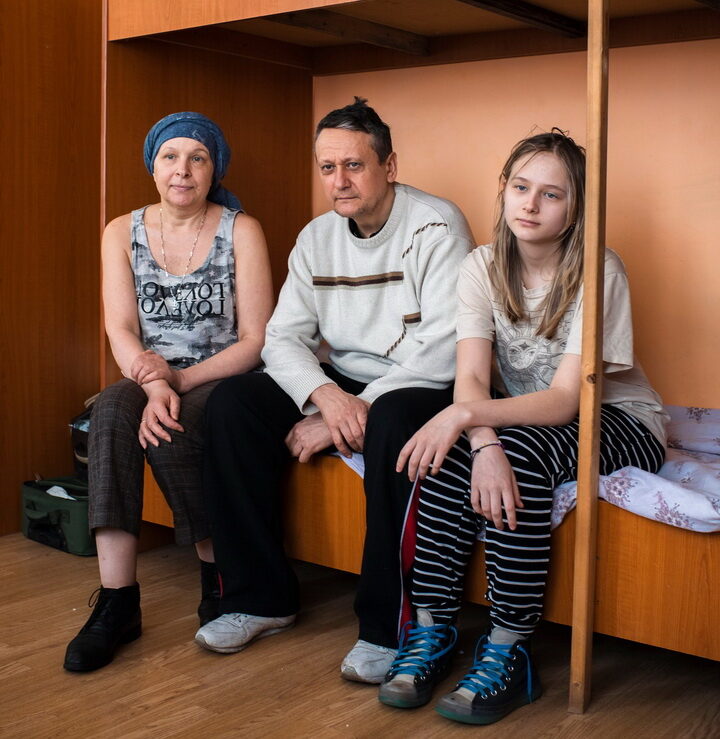 Larysa, her husband, daughter and the cat Bella escaped from Kharkov on March 1, 2022. Before fleeing, they spent four nights in the basement of their home due to the bombing of Kharkov. “Everyone wanted to travel out of Kharkov. There were a lot of people at the train station. The train ride was free of charge, but getting on the train was difficult due to the crowds,” Larysa says. The trip to Berehove took four days. Now Larissa and her family are staying in the refugee shelter set up at a school. “We are happy to have a place to sleep and where it is warm. We get food three times a day, we can wash and do our laundry, because there is also a washing machine here.” Larissa has cancer. She received treatment in Kharkov, but the hospital was destroyed in the bombings. Larysa hopes she could get treatment for her illness in Hungary. Larissa says she hopes for peace in the future. “We would like to live in Kharkov again, but right now we can’t live there because there are bombings and people are dying. It is safe here (in Berehove). I am glad our children are alive.” 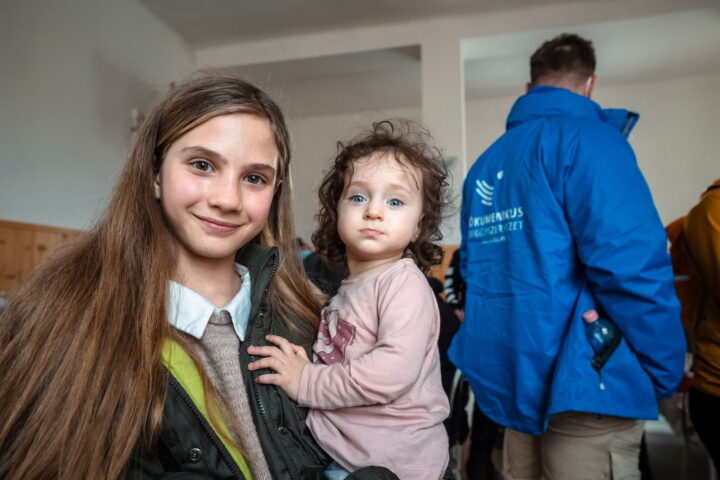 Antonia (10) holds Galyna (3) at an aid station at the Ukrainian-Hungarian border on March 2, 2022. Alina came with her family from near the Crimean Peninsula. She brought with her one toy and a colouring book which she already gave to another girl who had no toys with her.
The girls received aid at a shelter where ACT Alliance member HIA is assisting Ukranian refugees.

“My husband is on the frontlines. The women of my family have decided to take our children away from danger. We left Kherson, and decided to reunite with my sister in Dnipro. By the time we were leaving Kherson we heard that Dnipro was being bombed so we had to take a different way. We went where the car was taking us, I don’t remember most of the journey. My children were asking where are we going and I couldn’t come up with an answer. We heard that the Polish border is completely jammed, so we decided to cross the mountains and try to make it into Hungary. My sister is still on the way, I have no idea where she or my nieces are.

We’ve been standing here at this border checkpoint for more than 5 hours, it is cold and my children are freezing. It is amazing to see that people are here to help, and even just talking to you gives us hope for a better future.”